Confession Time: Yeah yeah I know its confession time! I have been MIA for a lot many days now and all I've been doing during this time was work and sleep. Seriously hate the time when work overtakes everything in your life! To make things worse, I can feel my tonsil glands playing havoc. This is making me wonder how come I’m struck with such bad cold when everyone’s complaining about the heat!

Continuing with the Celebrating Indian Women Series, let’s see which Indian diva we talk about today!

Today I’ll be talking about an actress (do I need to say she is extremely beautiful?) who charmed everyone with her ohhh sooo lovely dimples! And wooed every young man with her pairing and wonderful performances in some of the best romantic movies in the late 60s and the whole of 70s. Ah you got it! Yes she is none other than the charming and very elegant Sharmila Tagore.

And before I begin, let me tell you that I’m a HUUUGE Sharmila Tagore fan. [So don’t blame me if I seem biased. (wink wink) ]

Sharmila Tagore:
Tagore, the name’s Sharmila Tagore. Yes she is related to the notable Bengali poet and playwright Guru Rabindra Nath Tagore. She is his great grand niece and her grandfather G. N Tagore was a notable painter of Bengal.

Tidbits: She is related to the Tagore family from both her paternal and maternal families. Born 5 years after Tagore’s death, Sharmila received formal (school) education in those times, which was not common.
She is perhaps among those few women during her times, to have chosen acting as her profession and not just to earn her livelihood. She became an actress because she wanted to, not because she had to. She began her film career at the tender age of 14. 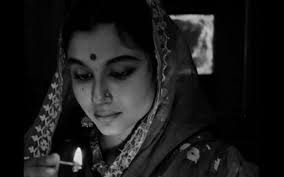 Memorable for: We all know what she is memorable for! She is memorable for 2 distinct things—her famous bikini scene in An Evening in Paris (AEIP) (totally unimaginable during those days!) and her successful pairing with Rajesh Khanna that catapulted both of them to stardom and, ushered in the wave of romanticism in Bollywood.
Here I would like add one more point—I loved her in a scene in her debut film Apur Sansar (Apu’s World, a Bengali film directed by Satyajit Ray) where only her eyes are visible through a hole in a torn curtain.

And, you must have read a lot about Kajol breaking the jinx –of married women can be successful heroines. But this jinx was originally broken by Sharmila Tagore. In fact, she landed the best roles of her career, after she became a mother.

What I like about her? I told you already that I’m her fan! So I like everything about her, her expressive eyes, her acting abilities, her screen presence and lastly her dimply smile. According to me she embodies the ideal Indian woman both in terms of her beauty and her achievements. And her perfect pair with her husband the late Tiger. For me they are the FIRST COUPLE of Indian Cricket. 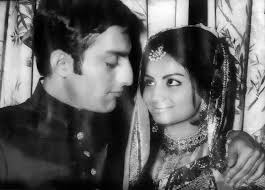 Also I feel she is one of those rare breed of actresses who exceled in all type of roles, starting from a beautiful belle (in Kashmir ki Kali/Araadhna) to a prostitute woman who longs for her foster son (in Amar Prem). Her body of work speaks volumes about her talent and acting prowess.

As my dad opines:

‘… when she cries onscreen, her crying seems most authentic out of all the Bollywood actresses of her time.’

She comes across as a very assured person, and knows what’s right for her. This is what she shared in an interview:

‘Once Saif was born, I started doing fewer films. I think it's important to be a hands-on mother. It is worth putting your work on hold for a few months. To keep awake and change their nappies.' Here's what she has to say to young mothers: 'You'll get to know your child well and begin to understand his or her temperament in those very first few months of their lives.' As a young working mother, Sharmila began to edit out all that was not strictly necessary from her life. 'If you sincerely want to do something you find the time for it,' she says. Though she continued to act in films - Amar Prem after Saif was born; Griha Pravesh after Saba's birth; and New Delhi Times after Soha came along - it was on her own terms. She stopped attending premiers and after-shoot parties, gave no interviews, and became even more fastidious about the films she signed. 'I realised a few films less, a few lakhs less, simply didn't matter.'

I also admire her for her penchant of breaking the norms and being rebellious. Here are two examples: Shakti Samanta was in for a shock when he learnt that his female lead wanted to wear a bikini in a song in AEIP. He cajoled and requested her many times, not to do so, as he felt this would not go down well with the audience. But she refused and threatened to walk out, if she was not allowed.

In Anupama, she sported the stylish bouffant despite Hrishikesh Mukherjee advising her against it.

One more (yeah this is the last one) remarkable thing about her is her sense of style. She is extremely stylish and you can see how it has evolved over the years. She dresses her age and manages to catch attention instantly and charms one and all. In her late 60s now, though she sticks to sarees mostly, yet she manages to look extremely stylish. I wonder how one can manage that!

Other Achievements: Until recently, she was the chief of the Censor Board (CBFC) and played an important role in keeping films away from political pressure. In several of her interviews, she did clarify that the Censor Board should be separate and should not bow to the whims and fancies of the ministers and the government.

Critics Say: Sharmila received flak for her portrayals of the conventional flimsy Bollywood heroine and was termed a dumb bimbo (audacious hun!!) . But all that changed with films like Araadhna, Amar Prem, Mausam etc. She was also at the centre of a huge controversy for entering films, and wearing a bikini. She could not continue studies because her teachers told her she was a bad influence on other girls.
When she wore a bikini in AEIP, she was only supported by her husband the late Tiger.

Trivia: Before attending Sharmila’s wedding, Satyajit Ray and his family were in a dilemma about what to gift her. They did not know what would be a good gift to the to-be-Begum of Pataudi. Suddenly Ray had a brilliant idea—'Can't we give her a 16 mm print of Apur Sansar? She clearly has no dearth of saris and jewellery; this would certainly make for a unique gift!' That was her wedding gift from her first director!

What do you think Ladies? Isnt she a gorgeous diva and a super woman in her own right.
Email ThisBlogThis!Share to TwitterShare to FacebookShare to Pinterest
Labels: Women's Day Series